“Healing the Brain with Neuroscience and Technology”

The 2023 SOBP Annual Meeting provides an interactive platform for learning and discovery. The meeting program focuses on alternative and transformative frameworks for understanding psychiatric illnesses, and presents enhanced and newly emerging tools for measurement and manipulation. Within these frameworks and with these tools, techniques and experimental designs are illustrated that can enhance understanding of psychiatric illness and elucidate the biological pathways and markers of illness processes.

Biological Psychiatry is pleased to announce that the spin-off journal, Biological Psychiatry: Cognitive Neuroscience and Neuroimaging (BP:CNNI) was launched in January 2016, led by its founding editor, Cameron S. Carter. This new journal publishes fundamental advances from both basic and clinical studies that provide novel insights into the relationships between brain and behavior using the tools and constructs of cognitive neuroscience and neuroimaging.  It is ranked 47th out of 271 Neurosciences titles in the 2019 ISI Journal Citations Reports® published by Clarivate Analytics. The 2019 Impact Factor score for Biological Psychiatry: CNNI is 5.335.BP:CNNI welcomes new submissions.  Submit here. 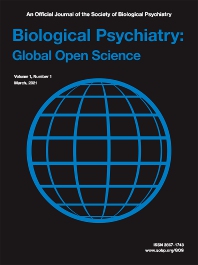 Biological Psychiatry: Global Open Science (BP:GOS) (BP:CNNI) was launched in 2020, led by its founding editor, Deanna M. Barch. The new journal will fill an important gap in what is now the Biological Psychiatry family of journals. That gap could be defined in two ways. First, BP:GOS will be a fully open-access journal. It is intended to be aligned with global initiatives to promote the dissemination of science through open access, such as Plan S (https://www.coalition-s.org/) and the goals of open science more broadly. Second, this new journal will complement both BP and BP:CNNI. BP:GOS welcomes new submissions.

Do the negative ways that others treat us contribute to later self-harm?

December 2022- Racism takes its toll on brain and body

Timely interventions for depression might lower the future risk of dementia

Volatile view of the world contributes to paranoia

May 2022-Effects of stress on adolescent brains triple network

Statins may provide protection against depression

April 2021- Leptin puts the brakes on eating via novel neurocircuit

March 2021- Rare mutations may have big impact on schizophrenia pathology

October 15, 2020 – Astrocytes build synapses after cocaine use in mice

September 23, 2020 – Amyloid deposits not associated with depression in the elderly

April 2, 2020 – Inherited Risk for Autism through Maternal and Paternal Lineage

March 5, 2020 –  Accumulation of Lithium in the Hippocampus of Patients with Bipolar Disorder: a Lithium-7 Magnetic Resonance Imaging Study at 7 Tesla